The Four Horsemen of Team Toxicity | Work and Private Relationships 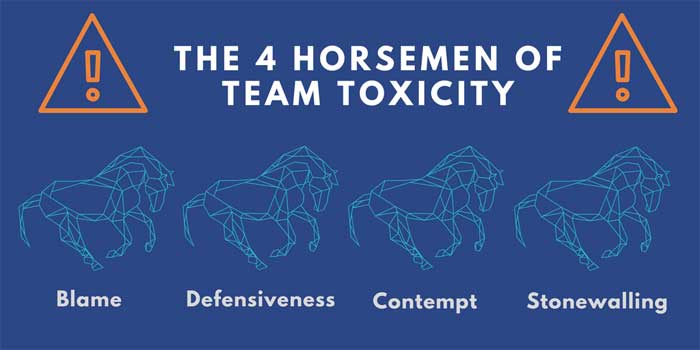 We are in relationship all the time. With ourselves, our families, and our colleagues.

In the 1970’s John Gottman began his extensive research into identifying the elements of successful marital relationships. After decades of observing thousands of couples, he developed a set of measurements he claimed could accurately predict the chance of divorce within 5 minutes of observation. While the definitiveness of this claim has been challenged, his research shows a link between these predictors and the behaviours that cause team relationships to suffer.

“Studies show that an employee’s perception that he or she works in an emotionally supportive environment increases job satisfaction, lowers stress, decreases the likelihood of quitting, and improves team performance. (Yale University research) showed that work groups’ performance suffered when members didn’t communicate well or didn’t pay attention to one another’s feelings, or when individuals became so controlling that they didn’t allow others to contribute.”  (The Relationship Cure, Dr John Gottman)

The essential ingredients of happy teams
There are some essential requirements for building good team relationships, the kind where people enjoy being together, collaborate, and support each other to achieve. Such teams are:
• high in positivity and appreciation,
• low in negativity and toxic communication styles even during conflict, and
• able to build powerful dialogue

Is your team heading for divorce?
Every team, like every relationship, experiences conflict and disagreement from time to time. It is in these crucial moments that we can learn from Dr. Gottman’s 3 main “divorce predictors”:

1. Harsh Start-up
Statistics tell the story: 96% of the time, you can predict the outcome of a conversation based on the first three minutes of the interaction. if your discussion begins with a harsh startup, it will inevitably end on a negative note.

2. The 4 Horsemen of the Apocalypse
We all make use of the 4 Horsemen of Blame, Defensiveness, Contempt and Stonewalling from time to time. But when one or more of these Horsemen trot more permanently into a team’s life, negativity can run rampant.

Blame or Criticism focuses on the other’s character instead of the action, and can be experienced as an attack, often sparking defensiveness.

Defensive behaviour is not open to influence. It is another form of blame, and escalates conflict.

Stonewalling is withdrawal, passive aggression and disengagement, and often shows up when the other horsemen have been running rampant.

Contempt: Of the Horsemen, Contempt has been shown to be the most destructive to relationships, and also negatively impacts the health of the one expressing it.

Key to working with the Horsemen is to understand the request, longing or perception beneath the Horseman’s appearance. For example, a fear of the consequences of making a mistake can sit beneath a tendency to blame.

3. Poor or no repair bids.
Repair bids are efforts people make to de-escalate the tension during a discussion. The success or failure of these attempts is an accurate marker for predicting team harmony.

Keeping the Horsemen at bay
If any of these signs seem familiar, here are three building blocks to keep the horsemen in check.

1. Build powerful dialogue and increase positivity
When a relationship system can see its own patterns, it can change. Insights Discovery uses the language of colour to help the team notice what is showing up, understand the drivers behind the behaviours, and so change. Powerful dialogue, handled skillfully, increasing positivity and appreciation.

2. Create a Team Charter
Using the Insights Discovery model, the team can now co- create a Charter which maps out the behavioural agreements they will live by and hold each other accountable to.

3. Develop a Conflict Protocol
Many people find having crucial conversations in an effective way to be one of the most challenging aspects of relationships. Identify your individual and team’s preferred “Horsemen”. Consider the underlying need, request or longing beneath the unskillful behavior. Then collectively develop a conflict protocol for how to handle things when they get difficult.

Some degree of conflict is a normal part of all relationships, and is an important indicator that something in the relationship system wants to change. The ability to engage in constructive disagreement, and keep the Four Horsemen under control during these encounters are key to a resilient, healthy and happy team.

Take a look at how you can write a business plan precise enough to align your business model.

Parliament agrees that data bundles are too expensive, so find out how much you are paying for your data rates.

Unpacking the do’s and don’t’s of social media platforms with your coworkers. Should you be accepting the friend request or not?