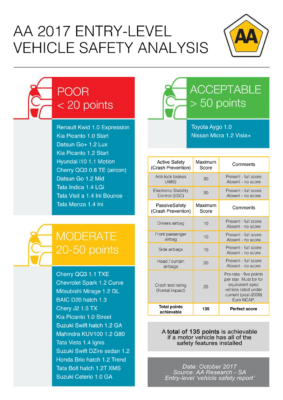 Some of South Africa’s best selling cars are considered too unsafe for the United States‚ European Union‚ Australia and New Zealand.

The main reason being that they are produced without any electronic stability control; a computerised technology that improves a vehicle’s stability by detecting and countering skidding – which has been a legal requirement for new passenger cars in those countries for several years.

Many of South Africa’s cheapest cars don’t have anti-lock brakes or airbags. Despite South Africa having one of the highest accident fatality rates in the world with 14‚071 people killed on our roads in 2016 – cars are still approved and justified as being “an affordable alternative to public transport”.

The Automobile Association of South Africa (AA) recently released its second annual Entry-Level Car Safety Report, stating that of the 25 cars selling at R160‚000 or less‚ only two makes are considered to have acceptable safety: the Toyota Aygo 1.0 and the Nissan Micra 1.2 Visia+ (with the Micra being the only vehicle with stability control).

Cars were awarded active safety points for per feature.
Ten were rated as having poor safety:

The airbag-free Datsun GO 1.2 Mid has been discontinued with the new Go starting at R129‚000 with only the driver’s-side airbag being available across the range.

But that leaves thousands of GOs on the roads without airbags. This model ranked impressive sales in September with 750 Datsun GOs sold, 701 in August and 782 in July.

Starting at R127‚000, the Kwid also did extremely well with more than 700 a month being sold despite its relatively poor safety features.

“The (Datsun GO) vehicle structure collapsed during the (crash) test‚ and the high forces placed on the dummies pose a grave risk of death or serious injury‚” Mosley said three years ago‚ about the time the GO went on sale in South Africa. “The GO’s body shell is so unstable that it would be pointless to include airbags in the car.”

He urged Nissan (who owns Datsun) to withdraw the GO from the South African market, including India‚ “pending a redesign of the car’s body shell to make it worthwhile to fit airbags”.

All you need to know about the desalination plants.