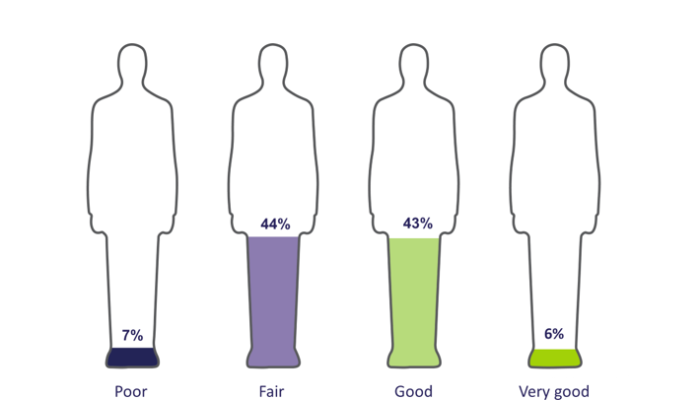 Senior leaders shape the culture of an organisation. Yet, when it comes down to the daily engagement levels of staff, no-one has a greater impact than first line leaders. Interacting with employees on a daily basis, supervisors and team leaders are most likely to influence an employee’s workplace experience, and thus their engagement levels.

They hold a tremendous responsibility and form a central link in the engagement chain. On the one hand, organisations expect them to execute strategy through their teams by shortening the line of sight between the work that team leaders do, and the needs of the organisation. While on the other, employees expect supervisors and team leaders to know them, pay attention to their needs, treat them with respect, support their development, and value and show appreciation for their contribution and efforts.

Ironically, it is in this area that one of the biggest capability gaps exists, with many organisations seemingly unaware of the key role first line leaders play in impacting engagement. As a result, these leaders are often unprepared and ill-equipped for the role. This ripples through to their own engagement levels and their ability to engage others.

In a study undertaken by Free To Grow between 2015 and 2017, a self-assessment of over 1700 supervisors and team leaders, across 59 organisations, creates a troubling picture of the levels of engage­ment at this level. Our findings reveal that almost half of first line leaders are disen­gaged. They do not find meaning in their work and do not feel committed to their organisation. This poses the question: How can these leaders inspire passion and commitment in their teams, if they themselves, are ‘run­ning on empty’?

The Me/We/Work/World Model holds that in order for first line leaders to step up and meet the requirements of employee engagement, they must be competent in the underlying four areas illustrated below: 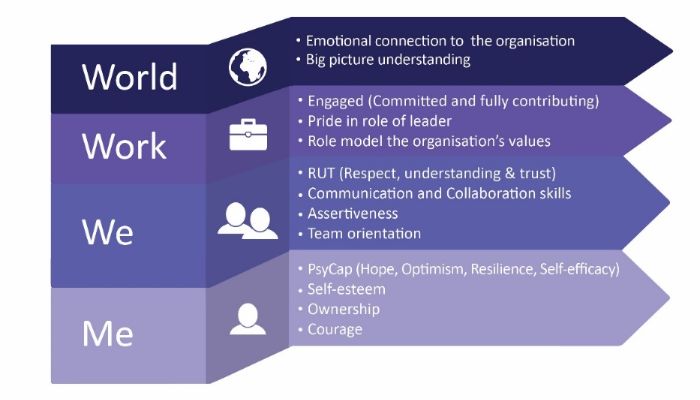 During the study supervisors and team leaders were asked to assess themselves on the qualities in each sphere. The findings clearly show that a huge gap exists between the competencies these leaders require to engage their teams and the competencies they actually have.

Ratings in the ME sphere

Before supervisors and team leaders can lead and engage others, they must be able to lead themselves. To step into this role of leadership and influence, they require a strong self-esteem and belief in their ability to handle challenges that may arise. In view of this, it is alarming to see how poorly first line leaders rated themselves in this area of self-confidence, an essential ingredient in being able to positively impact others. 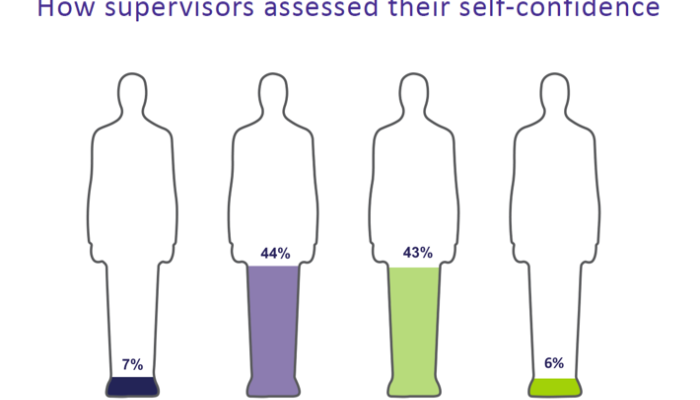 Ratings in the WE sphere

Engagement levels within a team are directly influenced by the quality of the relationship they have with their direct leader. The ability to achieve results through others is therefore largely dependent on people skills such as respect, trust, and understanding. Although the ratings in the We sphere are better than those in the Me sphere, it is still a concern that close to 50% viewed their people skills as ‘fair’ or ‘poor’. Attaining a ‘fair’ rating is definitely not sufficient for leaders who are required to achieve results with, and through, others. 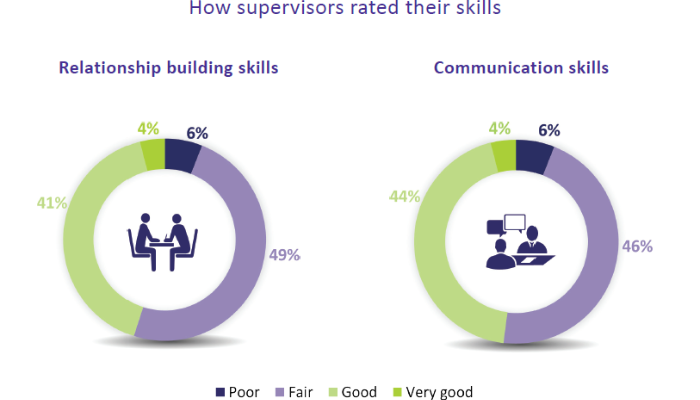 Ratings in the WORK sphere

As demonstrated below, only 55% of first line leaders indicated a positive attitude towards their work. Prompting the question, “how will these leaders, who rated their attitude as fair, or poor, impact their teams?” 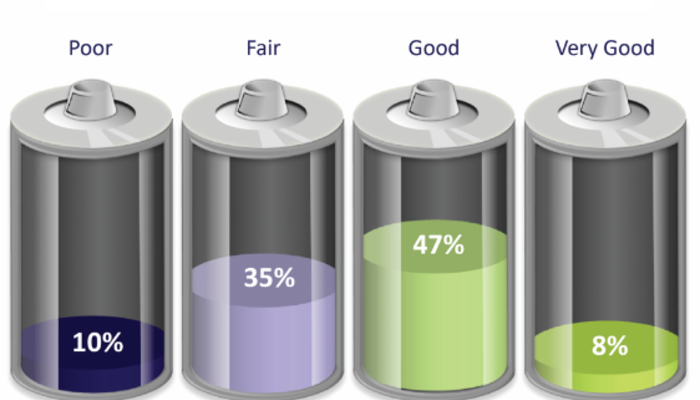 Considering these findings, it is no wonder that Gallup’s State of the Global Workforce Report found that 45% of South African employees are disengaged at work (2013). In some instances, this negative attitude manifests in ‘passenger’ behaviour, where employees passively put in the hours but display little discretionary effort towards their work. In worse cases, employees engage in ‘pirate’ behaviour, actively undermining what their colleagues are trying to achieve.

Ratings in the WORLD sphere

While it is expected of first line leaders to have a strong connection to the organisation, and as a result be motivated to contribute to its success, the reality is very different. A survey of 340 first line leaders indicated that only 50% felt connected to their organisation and even fewer considered themselves motivated. Connection and motivation are two essential drivers of engagement and without this commitment to contribute; it is unlikely that supervisors will inspire engagement in others. 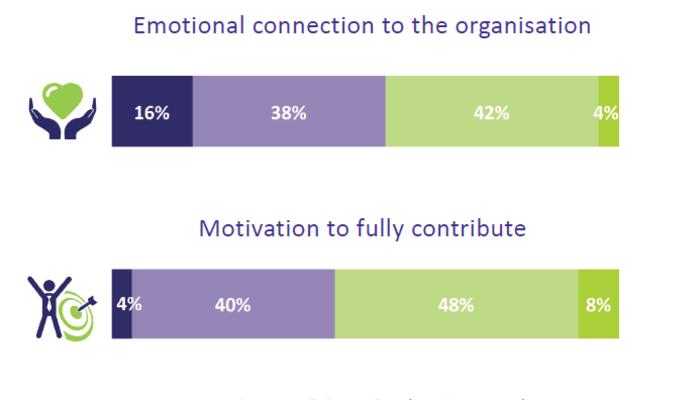 The reality is that organisations often place a strong focus on the training of managers, and neglect the development of supervisors and team leaders – those people who need to make huge mental and skill shifts in their transition from Managing-Self to Managing-Others. These leaders are expected to inform, involve, guide, coach, care, inspire and collaborate on a daily basis – skills that do not come automatically with promotion into a leadership role.

Our findings reveal that just under half of first line leaders are fulfilling this role without having received any training equipping them for the position. Almost as many have only attended one, or two, programmes. The focus of such training is predominantly on providing basic supervisory skills – essen­tial, but not adequate for tak­ing their performance to the next level. As a result, first line leaders regularly fail to meet the expec­tations that employees and the organisation have of them.

Leadership, culture and employee engagement are among the most important challenges facing business today, and increasingly first line leaders are being called upon to become active partners in driving organisational culture and performance. For this shift to happen, they need a deeper understanding of engagement, its benefits, and the role they play in creating the conditions for engagement.

Engagement is no longer something to be assessed once a year by looking in the rear-view mirror. Leaders, on all levels, are now expected to make engagement a daily practice so that it can become ingrained in the culture of the organisation. Currently, there are significant gaps in the engagement levels of first line leaders, and in turn, their ability to engage others. Through proactively equipping them with the mindset, skills and tools they require to fulfil their role, organisations can significantly move the needle of engagement in a positive direction. 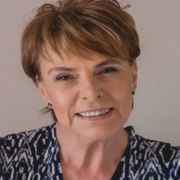