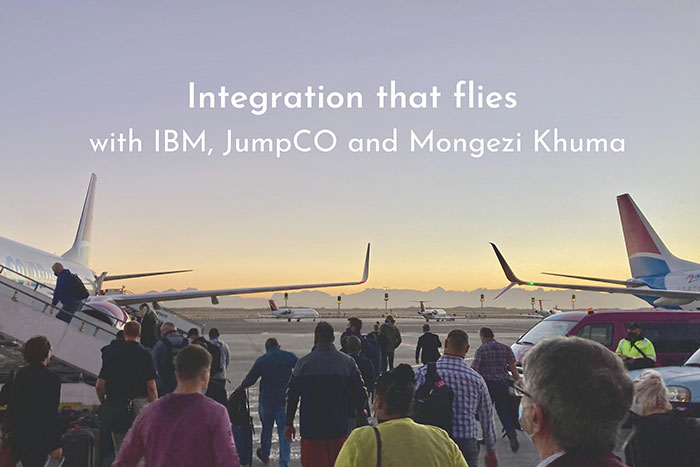 The learnership programme was preparing graduates for entry into the industry. Mongezi started learning Java, replacing the C++ he’d learned in University, and from there, he was on the road to his position as an Integration and Software Development Consultant at JumpCO.

From Bugs to Boeings!

He had never been exposed to computers as a child, but they fascinated him. He was first bitten by the concept of programming while watching Bugs, an action TV series where a team of independent crime-fighters fought off various threats using their tech savvy expertise with computers.

Mongezi’s first project was developing a staff appraisal portal for a leading commercial bank. They were able to build an application that brought all the moving components together that would allow the bank to standardise staff appraisals and give them useful data going forward.

Another highlight of Mongezi’s career was working with a major South African retail company. JumpCO worked with the company to move their old integration stack onto the IBM Message Broker platform (now called IBM App Connect), without having to manually create message flows in the IBM space. By automating the process, the team was able to generate objects that were ready for production. They could then push the objects into production without having to write the entire message processing flow.

Mongezi is now the team leader on a project that will touch your life next time you fly through a South African airport! You won’t see the ones and zeros flying around but rest assured that an inordinate amount of data is flowing around you to ensure your trip goes smoothly. Mongezi manages this feat by talking to Home Affairs for passport and biometrics validation through the IBM stack, DataPower, and App Connect Enterprise(ACE). The solution also connects the scanners on the gates reading passport information and routing it through different applications for monitoring and control of the gates.

Sizwe Mayaba, of Ulwembu Business Services had this to say about JumpCO’s involvement on the ACSA project: “JumpCO Consulting has delivered a range of professional services to our client, Airports Company of South Africa (ACSA), since 2017. These include Digital Transformation, Integration Development, Systems Analysis, Design and Solution Architecture and Technical Leadership for ACSA’s entire Integration platform, enabling us to meet our responsibility for Integration Design and Integration Solution Delivery across a range of Integration products. Additionally, JumpCO provides, architectural guidance and standards in the integration domain and quality assurance for all integration deliverables.

Mongezi values the exposure he’s gained to different industries highly which include banking, shipping, airports, media, and retail. Over the years he’s learned how to implement technically similar solutions to solve business problems that are as diverse as the industries he’s worked in.

Heading up the IBM fan club!

According to Mongezi, wherever you are you’re encountering IBM products: “IBM has the best tools, and they make the work much easier.” You get results faster than with traditional programming methods.” Another reason Mongezi loves working with IBM products is their extensive documentation. “This allows engineers to arrive at solutions effectively and efficiently,” he says.