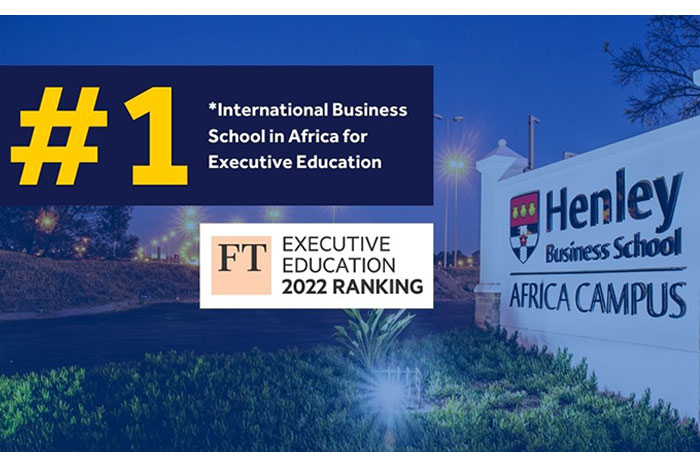 HENLEY Business School’s executive education programmes are now in the top 20 in the world and first in Southern Africa, according to the Financial Times annual review released on Monday May 23, 2022.

Henley Africa’s head of learning experience and executive education director Linda Buckley says, “It’s fabulous news. The ranking, which takes into account a school’s open and custom programmes is universally recognised as a strong indicator of the quality of the programmes offered because they are largely determined by client and participant ratings. We are particularly pleased that for this year’s rankings, a large percentage of the feedback for Henley’s global ranking for its customised programmes came from Henley’s South African clients.”

Henley Africa is an independent but constituent part of Henley Business School and accounts for two thirds of all the MBA students Henley has globally, from all its MBA programmes.

For dean and director Jon Foster-Pedley, it’s testimony to how far the school has come.

“We have to pinch ourselves sometimes to remember that when we started this process in South Africa back in 2011, we had five staff in a single office offering just one qualification – an MBA. That year we had 30 graduates. Our revenue has grown by 1200%, and our graduates have grown to nearly 2,000 per year.

The school also continues to shatter records with the numbers of MBA graduates capped each year, breaking the 200 mark for the first time in 2019. The trajectory of executive education has been even more stellar says Foster-Pedley.

“Last year it took Henley Africa three weeks to graduate everyone on the executive education programme. Executive education is a vital part of what we do. Our passionate service is to build the people who build the businesses that build Africa,” he explains. “That’s never been as important as it is now in the last stages of a global pandemic in a country that should be the economic powerhouse of the continent yet has the highest unemployment rates on record and the highest Gini co-efficient in the world. Education is critical to addressing the gulf of inequality and radically transforming the economy at the same time.

“Many companies are using our unique ladder of accredited management practice programmes to fast-track their talent development – sometimes from school leavers’ level through to MBA. Their feedback in the rankings show how effective these programmes can be.” Foster-Pedley adds the FT rankings are both a wonderful yardstick of the school’s growth as well as a validation for the many companies, especially in South Africa, which entrusted their staff to Henley to take them on this journey of unlocking their potential.

“We wouldn’t be here without the support of our corporate clients, for many of whom we have designed bespoke programmes that meet their training needs and inspire their staff to take the next rung on the ladder to an internationally accredited MBA. It’s wonderful that the FT recognises that the work we are doing is in the top 20 business schools around the world and I would like to use this opportunity to pay tribute and to thank the amazing faculty both here and in the global Henley community, and all our staff and educators in Henley who have played such an integral role in helping us achieve this.”