By: University of the Free State BUSINESS DAY FOCUS 4.0 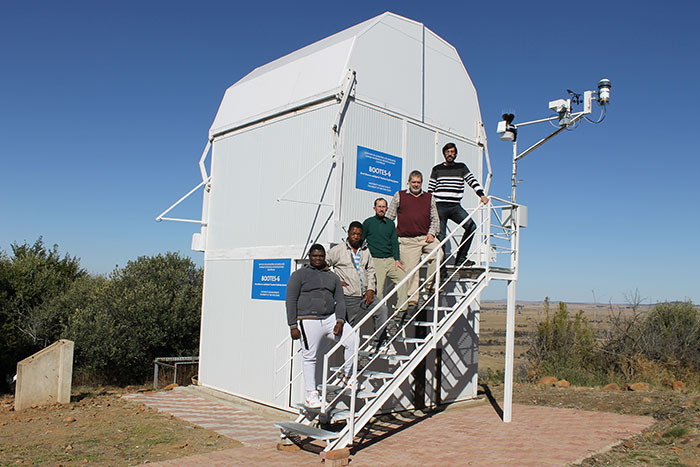 The Astrophysics Research Group in the Department of Physics at the University of the Free State (UFS) is part of an international collaboration with the Institute of Astrophysics of Andalusia (IAA) in Spain, which focuses on measuring the brightness of transient sources. Knowledge gained from studying these cosmic X-ray sources, which seem to appear in the sky for a short time before disappearing, will lead to a more complete and better understanding of the universe, believes Prof Pieter Meintjes, Professor of Physics and Head of the Astrophysics Programme in the Department of Physics.

To facilitate these observations, a robotic telescope network has been established, with the Boyden Observatory selected as one of the sites for BOOTES 6 (a Burst Observer and Optical Transient Exploring System).

The UFS and the IAA started working on this project more than two years ago. The foundation and pier were built through a local tender, and in January 2020, part of the dome of the structure housing the telescope arrived by ship. Due to the COVID-19 pandemic there were some delays, resulting in the crew from Spain only arriving in South Africa with the telescope and hardware in November 2021, but having to return to their country without completing the installation. They returned in April, and in early May completed assembling the telescope in collaboration with UFS researchers and technicians. 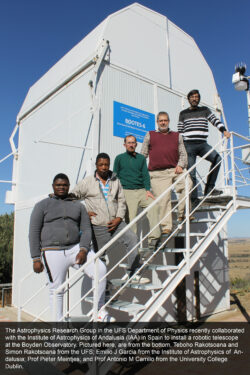 The main scientific objective of the robotic telescope is to observe and monitor the optic counterparts of gamma-ray bursts as quickly as possible when detected from space or other ground-based observatories.

Prof Meintjes says they will use the telescope to observe these transient sources that goes into an eruptive phase for a short span of time. “Since BOOTES has an enormously fast slew rate, it can start observations of erupting sources within a few seconds, which allows the Astrophysics Research Group to get data very quickly. This will certainly give us an edge over other international astronomy groups that are also involved in the same type of research,” says Prof Meintjes, the local coordinator of the project who is overseeing the whole operation locally.

He explains the importance of monitoring these packets of enormous energy. “By observing the optical afterglow of the gamma-ray bursts, we can establish its point of origin in space. Furthermore, the shape of the optical afterglow light curve gives insight into the type of mechanism behind the gamma-ray burst, i.e., whether the burst is produced by a collision between two neutron stars or by the explosion of a hypernova event.”

The UFS Astrophysics Research Group, with its research focus on high-energy astronomy and the physics behind gamma-ray bursts, has a particular interest in this project. As the local custodians of the project and in terms of a memorandum of understanding, the group is guaranteed a certain amount of telescope time for its own in-house observation programmes.

Besides the opportunity for knowledge exchange, this project establishes Bloemfontein as a region where research of international quality is being done and will help to attract talented learners to the UFS. “The successful operation of the robotic telescope may also draw more international groups to bring robotic telescopes to Boyden, thus expanding our international research footprint,” he adds.

The fact that the Boyden Observatory is in the Southern Hemisphere and has access to the galactic centre region with its host of very interesting astronomical objects and the Magellanic Clouds, makes it a very attractive site for astronomical research,” says Prof Meintjes.

“We also have a number of years of experience in robotic telescopes in the sense that we have been hosting the Watcher telescope, operated by the University College Dublin in Ireland, since 2001. Once mounted in middle May 2022, this will then be Boyden’s second robotic telescope.”